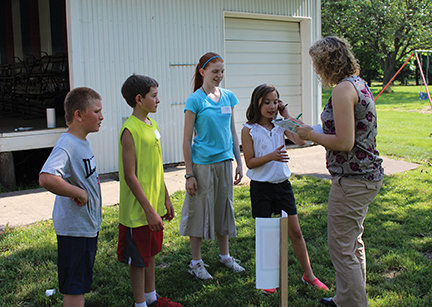 Every year, Adams Electric Cooperative, Ameren CIPS and University of Illinois Extension join forces to teach local students about electricity. They learn how it works and how to use it safely. This year’s event was held June 12 at Bailey Park in Camp Point.

Although the event helps 4-H members prepare for the fair, attendees are both 4-H members and non-members. Some students’ parents are members of the Co-op while others are customers of Ameren CIPS. Any student, age 8-18, within traveling distance is welcome to attend.

During the Electric Safety Amazing Race game, students teamed up to answer electric safety questions. Correct answers allowed teams to move on from station to station quickly, but a wrong answer meant the team had stop and perform a small task. One such task was moving an Oreo cookie from their forehead to their mouth without using their hands. Only after successfully completing the task, could the team move on to the next station. The team coming in first place was Allyson Hayden, Jacob Tenk, Garrett Wallace and Isabella Zanger.

Next, students watched a basket truck demonstration by Ameren Lineman Raymond Lagemann. He  showed students the safety equipment linemen use to work safely near power lines.

First year students made their own extension cords. Beginners learned the basics of electricity and were able to take their cords home.

Second year students used a soda can to make their very own lamp.

Third year students, in the circuits and switches class, learned the basics of house wiring.

The final class allowed students to see how the Cooperative uses its mapping system to locate members, maintain equipment and restore power during outages.

For questions about Electricity School or to be added to the mailing list for next year’s event, contact Laura Dotson at Adams Electric Cooperative at (800) 232-4797 or Christine Morey at University of Illinois Extension at (217) 223-8380. More information can also be found on Adams Electric’s website at: www.adamselectric.coop or University of Illinois Extension’s website at: http://web.extension.illinois.edu/abhps/.