On April 20, 1938, a group of 450 area farmers attended an organizational meeting at the Farm Bureau office in Quincy. All of these people had one hope in common that night; they wanted electricity for their homes and farms. During that momentous evening a group of people were elected to the board of directors of what was to become Adams Electric Cooperative. The Co-op established headquarters in the southeast corner of the Adams County Farm Bureau office, and on May 11, 1938 it was incorporated under the Not-For-Profit Corporate Laws of the State of Illinois.

Each director was responsible for signing up members and attaining easements in their area. These dedicated, optimistic people had to be troubleshooters – convincing fellow neighbors that electricity and the cooperative would really work. The biggest selling factors for the directors were lights and convenience. Electricity would change the way people lived and worked for the rest of their lives. 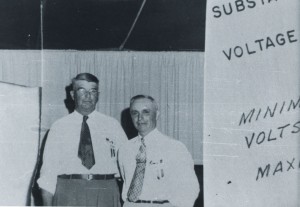 In the beginning Adams Electric Cooperative served a little over 700 Members with 384 miles of line. (Pictured left is John Sargent and Roy Sharrow, early directors. Roy Sharrow was the first president of the Board of Directors.) Today, over 75 years later, Adams Electric Cooperative is over 7,400 Members strong (8,900 services) and has over 2,256 miles of line in Adams, Brown and Schuyler counties, as well as parts of Pike, Hancock, McDonough and Fulton counties in Illinois. Boundary lines have been established and Adams Electric only serves within its territory. Thirty-four dedicated, well-trained employees operate the Cooperative.

Adams Electric is one of about 1,000 rural electric cooperatives in the United States. The ultimate control of the organization is through a board of directors elected by the Members of the Cooperative. 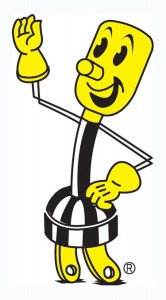 Adams Electric Cooperative’s mission is to strive to exceed our members’ expectations by providing safe, reliable and affordable electric service in a cooperative and environmentally responsible manner.

Adams Electric Cooperative’s vision is to be the area’s preferred electricity provider by utilizing the latest resources and technology to provide exceptional and affordable service to our members.

Adams Electric Cooperative values an environment where employees and directors share responsibility for the success of the Cooperative, we have high expectations for each other, employees provide excellent member service, and decisions are driven for the benefit of the membership.